A Video Speaks To Your Client

A picture speaks a thousand words.

Yes, we’ve all played the game. I’ve done it in my video: 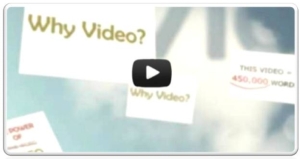 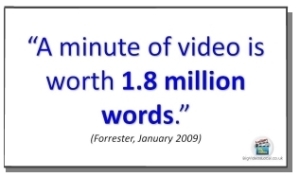 What matters is that video is the media with the greatest power of persuasion.

Because video does not only carry the message like the printed page conveying arguments, facts and details. Video carries above all emotion. And it does that on the same two levels a face-to-face conversation carries these signals: voice and body language.

In real life, people believe and trust others not because their arguments are rational and logical. They believe and trust others because of the way they communicate these arguments. It is their tone of voice, they way they look and carry themselves when they transmit their message or tell story or issue a command that make them persuasive and oblige the viewer to follow them. It’s not the logic of what is said that carries the day, it’s the person who says it.

This is, in a nutshell, the reason why especially online video, and not the printed word or an illustration, is the supreme communicator.

That is why a picture speaks a thousand words that may or may not reach their target, but a video speaks directly to your client.

Use it, and you’ll stay ahead of the game but you ignore it at your business’ peril.

In future blog posts, I’ll go into much greater detail about all aspects of why video is not just the future but already now an indispensible communication medium.

Next post: Online Video – Show And Tell For Grownups